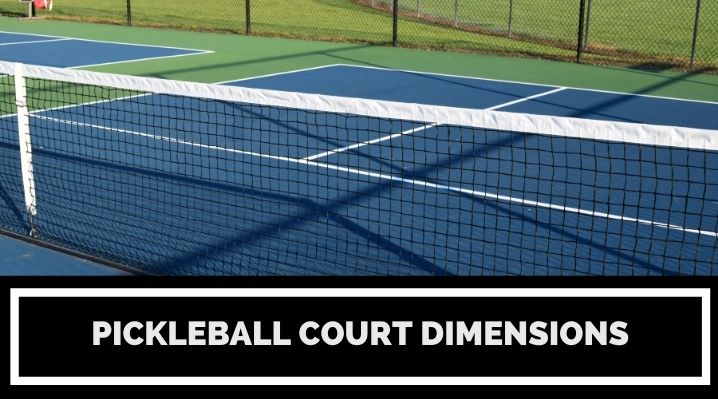 Pickleball courts are 20’ x 44’ for both singles and doubles play (the same court size as in badminton for doubles play).

The net height in Pickleball should be 36″ on the sides and 34″ in the middle.

How to Make a Pickleball Court

If you’re going to build a Pickleball court at home, in a park, or anywhere else, you’re going to need to make sure you have enough room. Even though the dimensions of the court are only 20 feet x 44 feet, you really need more space than that to play the game because players will often have to run or move off court in order to play the game.

So, to build a court you will need an area of at least 30′ x 60′ at a minimum to provide a safe area for players to play the game on and off the court as it is designed to be played. Ideally, I believe the space should be at least 36′ x 60′ so that players have enough space to run sideways to hit balls that bounce off-court and hit ATPs (Around the Post shots) without fear of running into other players or obstacles and injuring themselves.

If you build a court with a total area of space on and off court of 36′ x 60′, players will have 8′ of space behind the court and on the both sides of the court, allowing them enough room to effectively and safely serve and return deep serves, hit ATP shots, and hit shots at an angle that bounce off to the sides of the court.

You can search online for companies in your area that can build a Pickleball court for you. Just make sure you ask them to design the space around the Pickleball court with enough room on the ends and sides of the court for safe and fun play.

Trust me, if you build a court with less than 8′ of space on each side of the court, some players will complain and possibly get injured because of the lack of open space to play the game as it’s meant to be played. Many courts have only about 6′ of space on the sides and ends, and that amount of space can work, but 8′ is even better.

Make Sure You Have Enough Space for Pickleball Courts

Far too many Pickleball courts have been built by well-meaning people in public parks and at homes with too little space for competitive, safe Pickleball games. Many public Pickleball courts are not used because they don’t have enough space.

For example, I once played on a public court in Indiana where the court was surrounded by fencing with an area of 28′ x 54′, meaning you were likely to hit the fence on every serve and serve return shot, and on any shot hit at an angle that bounced off the court. Needless to say, I never again played at that court (and no one else I know plays there either).

Please don’t waste your money or time building a permanent Pickleball court that doesn’t have enough space to be used safely!