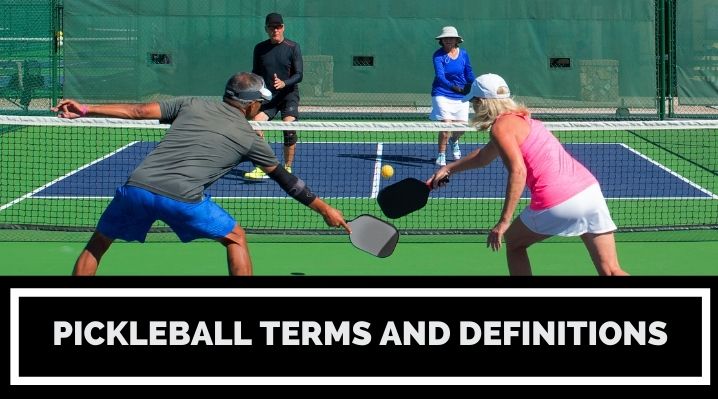 Pickleball is a fun game with a lot of different terms and phrases that you might not have heard before.

Ace: A serve that is not returned by the opposing team.

Around the Post (ATP): A shot that his hit around the net post instead of over the net, made possible because the opposing team hit a cross-court shot with a steep angle.

Backhand: A shot made on your non-dominant side (the back of your hand will be turned toward the net when you hit the ball).

Block: A volley shot with little or no swing intended simply to defend against a fast shot from your opponent.

Body Shot: A shot hit directly at high speed at a player with the intention of hitting them in order to win the point. NEVER hit a body shot at a beginner because you could injure them if they don’t know how to defend themselves. NEVER aim a body shot at someone’s head, neck, or face. The ideal spot to aim a body shot is at a player’s dominant shoulder. If the opponent dodges the body shot, it will almost certainly land out of bounds, so it is a high-risk shot and best executed when a player’s feet are not set so they cannot quickly move out of the way.

Dead Ball: A dead ball is a ball that’s no longer in play because it was called out or a fault was called. Note: “Dead ball” could also be used informally for a ball that is broken, misshapen, or otherwise unusable for play.

Dink: A dink shot is a soft shot that bounces low and often lands inside or near the non-volley zone. The purpose of a dink is to hit an “unattackable” shot so that your opponents can’t hit down on the ball for an easy winning shot.

Double Bounce: When the ball bounces twice on one side of the court. A double bounce is always a fault.

Drive: A fast-paced groundstroke shot, ideally hit just over the net with topspin to make sure it lands inside the baseline. Often used for third-shots (but not as often as drop shots among pro players).

Drop Shot: A shot that is hit softly over the net and often into the non-volley zone. Ideal drop shots are unattackable because they bounce very low.

Drop volley: A volley shot that is hit soft and short, ideally with backspin and into the non-volley zone.

Dura: A Dura Fast 40 brand of Pickleball. It used to be the most commonly used pall in tournaments, but now the Franklin X-40 is.

Ernie: A volley where a player either jumps over the non-volley zone or runs around or through it (and establishes their feet outside the non-volley zone) in order to hit the ball as close to the net as possible. It is illegal to hit an Ernie if you cross the plane of the net with any part of your body or paddle before striking the ball (it’s totally okay to cross the plane of the net after striking the ball on your side of the net).

Flick: A flick is a shot where you flick your wrist up while lifting up with your legs to create a heavy topspin shot. Players often aim to disguise their flicks as dinks to create a surprise attack.

Forehand: A shot made with your palm facing forward on the dominant side of your body.

Inside Out Shot (or “IO”): A shot hit in the opposite direction of your swing path by turning your wrist away from your swing path. Inside Out shots can often surprise your opponents because the ball will go in a different direction than your swing would indicate.

Let: A serve that hits the net and then lands in the service court. Let serves are replayed indefinitely until a fault or legal serve is hit.

Lob: A high shot often hit deep into the court with the intention of hitting over the opponent’s head so they cannot hit an overhead and must run into the back of the court in order to return it.

Nasty Nelson: When the server hits the returner’s partner intentionally in order to win the point. Although it is a legal way to win a point, these shots are highly frowned upon and can cause serious injuries, so you should be extremely cautious attempting this shot. NEVER hit a Nasty Nelson against any beginner, anyone with an injury, or any person you do not have a very close relationship with.

Net Spin: Net spin is a term for the additional spin or change of spin that occurs when a ball hits the net and then hits the ground. Any ball that hits the net will have its spin changed, sometimes causing balls to bounce unpredictably once they strike the ground.

Overhead: A shot that is hit with the paddle over your head. You can hit a forehand or backhand overhead, although forehands are almost always superior given the awkwardness of hitting backhand overhead.

Placement: A term for the trajectory of your ball and where it lands on the court. A common saying is that “Placement is more important than power” because you can hit a soft ball placed somewhere on the court where your opponent can’t reach it or can’t hit a good shot, allowing you to win far more points than simply hitting a ball with lots of power and poor placement. Generally speaking, the best placement for most shots is at your opponent’s feet or slightly behind their feet on their backhand side.

Rally: All the shots made during a point constitute a rally. Players will often say “Great ralley!” after a fun or exceptional point.

Roller / Rolling Shot: A shot that is hit with a lot of topspin by “rolling” the paddle over the pall in an arcing motion.

Side Out:  When a team loses its service and the other team gets to serve next.

Skip: Balls hit with lots of spin will skip, meaning they will bounce much lower and sometimes in a certain direction in a way they would not without spin. Balls also skip extra hard on many courts when they land on court lines because of extra sand used in the lines which causes more friction, thus creating an amplified effect from the spin of the ball. If you see a ball skip extra hard near a line, chances are it hit the line, which is why when a ball skips near the outer lines of the court, players should almost always call the ball in.

Slice: Any shot hit with heavy backspin. Most professional players hit serve returns with a slice on their forehand and backhand side.

Split Step: A technique used by all top players in tennis and Pickleball where you jump slightly as the opponent strikes the ball and use that stored momentum from the landing in order to move more quickly towards the ball to set up for your shot.

Tweener (Between the Legs): A shot where you hit the ball behind your body and through your legs.

Volley: Any shot hit in the air before the ball gets a chance to bounce on your side of the court. Volleys are illegal if your feet are inside the non-volley zone or if they are hit on the 2nd or 3rd shot of a point (Because of the double-bounce rule).

All of the terms below are related to the Pickleball court.

Centerline: The centerline splits each side of the court into the right and left side as it runs from the non-volley zone to the baseline.

Sideline: The sideline runs perpendicular to the net on either side of the court. Any shot that lands beyond the opponent’s sideline is out-of-bounds.

Transition Area: The area of court in front of the baseline but behind the non-volley zone.

No Mans Land: A nickname for the Transition area.

Non-Volley Zone: The area within 7 feet on both sides of the net where volleying is not allowed if your feet are inside the zone or touching its boundary lines.

Kitchen: A nickname for the non-volley zone. We highly recommend you don’t use this term because it is confusing to players whereas “non-volley zone” is self-explanatory once you know what a volley is.

Service Courts: The areas on the left and right side of the centerline, bounded by the non-volley zone line, the baseline, and the sideline.